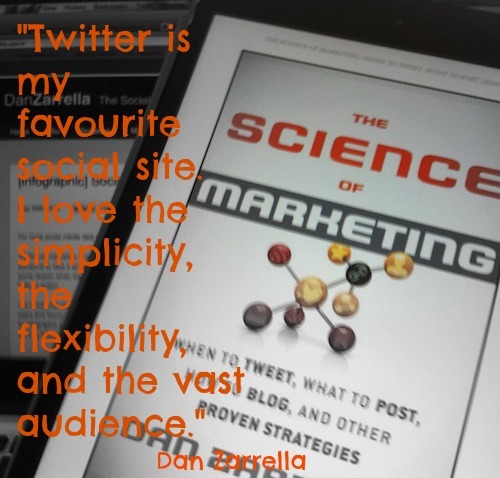 I’ve always found Dan Zarrella’s graphs, stats and blog posts interesting so when I saw that he’d just released a new book ‘The Science Of Marketing’ I bought it for my Kindle immediately.  It’s a great read and I find myself highlighting massive sections of it as I go.

This week I thought I’d share the 8 top Twitter tips I picked up from it. You’ll notice I have my skeptical hat on for some of it but in general it’s great advice.

The data on the best time to post to get click throughs on Twitter shows that it is very often after the working day is finished or at the weekends. Dan calls this contra competitive timing.

“I follow thousands of accounts on Twitter. My Twitter stream is very active during the business day Monday through Friday. On the weekends, it moves much slower and what content does come through is often about sports and other non-work-related topics. The few times something interesting about marketing does show up on a Saturday or Sunday, it gets more of my attention because there are fewer things fighting for it.”

I am a day time, week day tweeter, maybe because I’m business to business, however it is worth experimenting with tweeting at different times, particularly if you are sharing your own content to see if you get a better result with less competition. Try tweeting at weekends or late in the evening.

According to the research:

Again it’s worth trying. Dan puts this behaviour down to the working day, people are more likely to procrastinate or take their foot off the pedal later in the day meaning they are more likely to look and interact with links on Twitter.

Dan’s data shows that tweets with links posted towards the beginning of the tweet get a higher click through rate:

“After I posted these data several people have told me that they’ve experimented with the format like ‘new post: http://linktopost.com title of the post’ and it worked for them.”

Why is this? Even Dan isn’t sure.  Could it be the novelty of seeing a tweet constructed another way or do we psychologically click a link when we don’t have to do much reading beforehand?

I was on the #blogchatie Twitter chat recently and I was surprised to hear that many of the contributors only posted a link to their newest blog post once. I tweet mine at least twice a day until the next one comes out! I understand that it can be overkill if all you see the same link constantly appearing from the same account but it’s important to remember that Twitter a fast moving stream, because of this many of your followers won’t see your post if you share it just once.

It’s not enough just to share your own content of course, you must share other relevant links as well but you don’t have to worry so much about the CTR on those.

“If you want me to share your content, you need to say something new, something I (and my followers) haven’t heard – or read before”

This is something we have all encountered on social media, a huge media event happens and businesses all try and jump on the bandwagon. Newsjacking and Real Time Marketing can be hugely effective but it is always important to contribute something new to the conversation. In doing so you become more attractive to followers and will look like an authority. For example I try and do this by looking at events from the perspective of small and medium sized businesses as this is my niche.

6. Avoid being self referential

“If you’re on Twitter to communicate with friends you know in real life, feel free to talk about yourself all day long, but if you’re there for marketing and business reasons, stop talking about yourself.”

Rather controversially the data also shows that the highest followed accounts on Twitter rarely engage in conversation. If you are a regular reader of my blog you will know I’m a big believer in the power of conversation in social media. The problem with the data as far as I can see is that it is an analysis of the most followed accounts on Twitter. For smaller businesses and people just starting out it is almost impossible to get followers without conversing. My Facebook followers seem to agree.

“Calls to action work in all forms of marketing, and social media is no different. If you want more retweets, ask for them”

This is another one that I’m uncomfortable with. I’ve seen this data a lot over the last few years so it does seem to be true that asking for a RT will get you more RT’s. However from a personal branding point of view I would rarely ask for someone to share my content. To me it always seems a little like begging. However, it does work so if you feel comfortable enough with doing it you should see results.

“Accounts that posted 60 to 80 percent links tended to get the most retweets.”

Dan’s analysis concludes that posting lots of links (as opposed to tweets without links) will result in more retweets. Could this be because a link adds more value than 140 characters alone?
Even Dan himself says you should take the data with a pinch of salt, experiment with it and see if it works for you. I’ve been playing with putting my links closer to the start of my tweets this week and might try a bit of contra competitive timing.

I’d highly recommend reading the rest of The Science Of Marketing as it’s jam packed with tips like these covering multiple networks, blogging and promoting e-books and webinars. You can buy it here in hardcover or Kindle version