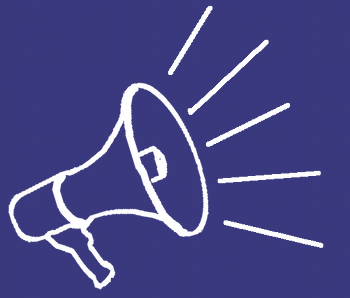 At the beginning of the week I noticed the ‘Promote this post’ option pop up at the bottom of the status update box on my Facebook page.  This happened around the same time that Facebook started showing me the % of my Facebook audience that I was reaching with each post rather than just the number of people reached and the number of people talking about it.

Both updates seem to have rubbed business owners up the wrong way.  It has been the case for a long while, at least since the newsfeed update last autumn, that pages are not reaching 100% of the people who ‘Like’ them.  Facebook have told us that on average only 16% of our ‘Likers’ see our posts.  This makes sense to a certain extent, Facebook users are making more and more connections so in order to stop our newsfeeds scrolling as fast as they do on Twitter, Facebook is selective about what it shows us.  In experiments I’ve noticed that if I post three times in succession from one of my test pages the first post will show on my feed but very often the second or third doesn’t, even when I have it set to ‘latest updates’.  If I want to see everything posted by everyone I can keep a close eye on the ticker.  As someone who likes 100’s of pages it’s a bit of a relief that I don’t see everything, I would be overwhelmed if I had to scroll through every update manually.

Promote individual posts on Facebook to improve your reach

Quite rightly businesses are concerned about the push towards advertising, we’ve been given a free tool to play with and Facebook now seem to want us to pay to stay relevant, however, if you can be creative and are willing to spend a bit more time you can get results without spending.  There is a place for promoted posts but I don’t think it’s as simple as big businesses paying to promote all their posts.

Promoted posts aren’t for lazy Facebookers even if your post reaches your entire Facebook audience there is no guarantee they will click your link or buy something, you will need to take time crafting a post that will work and encourage sharing, interaction and sales.  They could be used occasionally and cleverly to achieve particular goals.

Edgerank is the algorithm that dictates what pieces of your content arrive on the newsfeeds of which of your likers.  In very simple terms it is derived from the type of content you are posting, the amount of time it stays in a newsfeed and the amount someone has interacted with you previously.  Using a promoted post to reach more of your audience and including a strong call to action to ‘Like’ or ‘Comment’ means that those same people are more likely to see future posts from you even when they are not promoted.

2. To promote a specific offer

One of the biggest reasons for people to Like a page on Facebook is to hear about offers, so if you create a really good offer it might be worth paying for it to reach more than your usual audience.  Again, it’s not enough just to put up a status update with a discount code, you will need to spend time making sure you are going to get maximum return on your reach.  Creating a really strong image with the offer on it is one way to encourage more interaction and to be more memorable.  Think hard about your call to action, make it easy for people to redeem by either including a link to your offer page on your website or an easy to remember phrase that people have to say when they drop into your shop.

How do promoted posts work?

Before I wrote this blog post I thought I should try promoted posts out to see if they worked, how they worked and by how much €5 could improve my reach, with some interesting results. 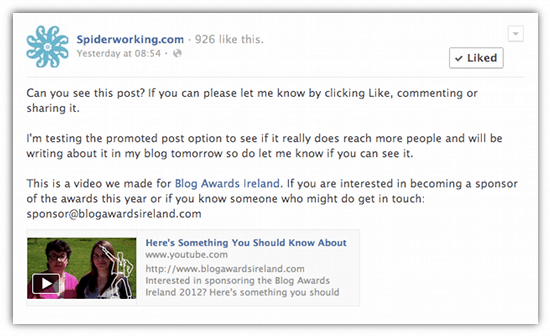 I created a post that I would like to get more exposure, the sponsor video we created for ‘Blog Awards Ireland’.  Prior to posting the video had received 128 views.

I included a strong call to action for engagement at the top of the post.  I rarely ask for people to click Like but I knew that this would encourage the post to become more viral and get shared on tickers and newsfeeds of the people who clicked the Like.

I included a secondary call to action, for sponsors to email us at a specific address.  This would be harder to measure as the same email appears on most of our marketing material and our website. It was also far further down the post so many wouldn’t see it.

Thirdly I intended to measure video views.  The video was posted to YouTube and I shortened the link that I posted to Facebook using Bitly so that I could measure click thrus. 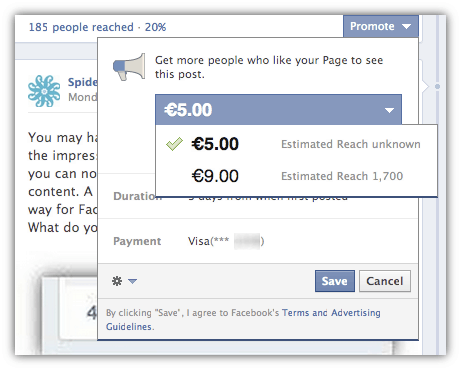 Once the post was constructed I clicked the ‘promote’ button and I got a few options.  I could either pay €5 to promote it but Facebook couldn’t guarantee the reach or €9 for which they promised to reach 1,700 people (way beyond the number of Likes on my Facebook page).  I went for the €5 option.

Not surprisingly, because of the call to action I instantly started to get people clicking the like button underneath the post,  the post will be promoted for three days so even as I type this the number of likes is growing.  It’s currently at 49.

Because people were clicking ‘Like’ the post was getting seen by more people outside the pages fan base it was getting shared in the newsfeeds of the people liking the post and I was seeing a huge increase in viral reach.  None of this could be put down to the fact that the post was promoted though, more the strong call to action.  At 4pm just under 6 hours after I made the initial post I checked my statistics and noticed that only 1% of my page likers that had seen the post had done so due to the promotion.

What I did discover is that the post was reaching newsfeeds long after it was posted.  I got comments on the post that it was appearing at the top of news feeds set to top news and I’ve even seen it appear in my own newsfeed today.  I’m wondering will this continue until the three day’s are up?  This longevity is a massive benefit if you are promoting an offer, we usually expect posts to last for around three hours. 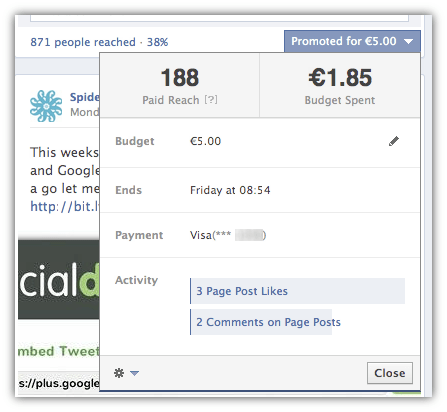 Likes and comments due to promotion

This afternoon the statistics for the post are that 38% of my pages likes have seen the post and Facebook tells me that 3% of these are due to the promotion. That’s 188 extra people, it also tells me that this has resulted in 2 comments and 3 post likes. I’ve only spent €1.85 of the €5 so far so I’m hoping to see that increase over the next day. 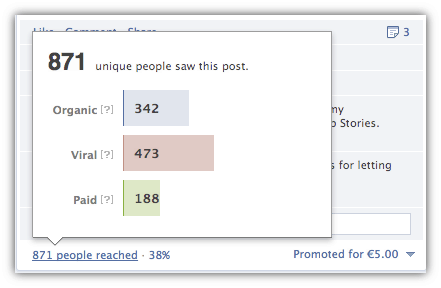 38% may sound impressive when you sit it alongside Facebook’s claim that most page posts only reach 16% of their audience but if I look back at posts from the last couple of weeks I can see a couple that reach above 40%.  Although the number of people who have seen the post is high at 871, with just 2 comments and 3 likes the promotion cannot be held responsible for the viral spread so it would seem that a simple yet strong call to action can buy you far more reach than an ad.

As for the video, although my call to action was to Like the post I thought it would be interesting to note any increase in video views, Youtube records 20 views since the post went live.  My Facebook insights attribute just 4 to my post, I also shortened the link to the video using Bitly and can see that there were 17 clicks on the video via that link, this means the shares that I gained (none of them due to the promoted post) gained me those extra views.

Yes promoted posts can work, they will help you reach a portion of your audience that don’t normally interact with your page but you need to have a strong call to action and you need to choose the right one.  Imagine I had chosen to ask for a share or for people to watch the video instead of for the like?  My campaign could have been far further reaching and may have gained Blog Awards some sponsors.  Maybe I could have captured more from that 3% I reached due to the promotion.  However most of the benefit I got from the post, most of the likes and all of the shares came from people who regularly contribute so by crafting the right post in the first place my reach would have been almost the same.

Have you tried promoted posts? Would you try them?  I’d like to hear your thoughts so do leave me a comment.