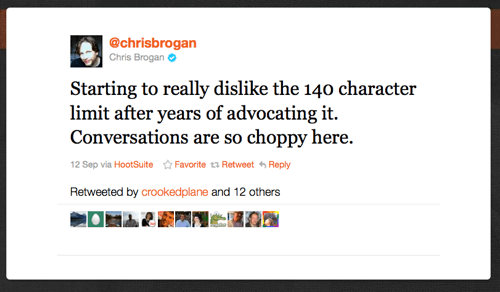 “Starting to really dislike the 140 character limit after years of advocating it. Conversations are so choppy here.”

Before I give you my reaction a bit of background

I have to admit one of the things I’ve enjoyed about Google+ is watching it evolve, watching early adopters whose opinions I respect discussing the new network, and discovering how it works.  Chris Brogan for one hung up his keys at Facebook and moved lock stock and barrel over to G+.  These people were finding new ways that Google+ would work and sharing them with their followers.

After a while it became apparent that Google+ was not just a potential Facebook rival but also a Twitter rival, the stream was reminiscent of Twitter and you have the ability of following people who don’t follow you back.  There was nothing amazingly different about Google+ but it was taking the best bits of other social networks and improving them.  And therein lies G+’s strength.

With a massive user base that grew at a rate that must have struck panic into the heart of Mark Zukerberg I was beginning to think that perhaps it could eclipse Facebook and do so much faster than I’d originally anticipated. However this has yet to happen.  There are members all right but few are active and my feed is still dominated by a few power users.

When G+ was launched I avidly created content specifically for it, I routed out my best photos, made specific videos and found links just for sharing there.  To me if I was going to be a success with Google+  I’d have to discover what to post and how to differentiate what I was doing there to what I did on other networks.  My community and potential target market are very much ensconced on Facebook and Twitter so leaving them like Chris Brogan did wouldn’t work for me.

As time has passed I have posted less and less. I dip in everyday to have a look at what’s going on and sadly I now break my golden rule. “thou shalt not post the same content to Facebook and Google+”.

There are some people on there whose streams I find entertaining.  There are some great photographers and seeing photos in the timeline is definitely one thing that G+ has over Twitter.  There are also the social media peeps. Chris Brogan, Mari Smith.  They post great stuff and I love reading it but I hesitate before commenting.  Why?  Well firstly the volume of notifications.  Yes I can mute a post but really my trips to G+ are swift and stopping to mute stuff on the way seems unnecessary.  The notifications that someone else has responded to the post would be fine if there was a conversation going on but each commentator seems to act individually, they are communicating with the original poster but not me and not the others who have left comments.  This is how it works on Twitter but surely G+ gives us the platform to converse.  I myself am guilty of this.  I leave a comment based on the original post and the first few comments I see.  Real conversation can spring up on G+ but usually it’s on the content posted by less influential users.  I’ve participated in small scale conversations on both my own and other users posts.

I guess part of the reason for this is the curse of celebrity, Twitter has given us unpresidented access to celebrity and this has carried forward to Google+.  The problem being that Twitter is filtered so we don’t all see @replies of adoration aimed at high profile users, sadly on Google+ we do.

So with all those users I still see my feed dominated by celebrities or power users, I see some of my contacts struggling with G+ or like me just throwing the odd link up here and there.  It’s partly my fault, I’m not leading my community over to G+, I’m not encouraging them the way others there are and unless I, and people like me, make a better effort Google+ can not succeed.

“@chrisbrogan G+ isn’t ready for the masses yet.. us with smaller communities are finding it harder.”

to which he responded

As if to endorse the sentiment of his original tweet I’ve had to post over 800 words to explain my thoughts.

I’m not sure I disagree with Chris Brogan’s point of view as such I’m just not there yet and neither is my community.  It’s almost as if due to his loyal community base he’s been able to take the express train to Google+ adoption where as I’m still on the steam train, we stop more often on the way though and hopefully we’ll pick up passengers on route.