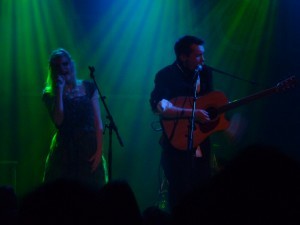 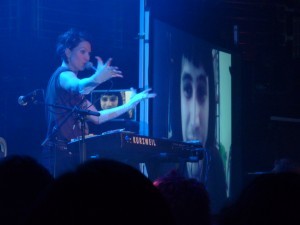 I was lucky enough to be at an Amanda Palmer (Dresden Dolls) gig in Dublin this week and aside from being an amazing night out it also showed me how musicians and performers can use Social Media to communicate with fans and creatively overcome issues.

The support act ‘Bitter Ruin‘ were a self proclaimed ‘really small band from Brighton’ who had stumbled upon an opportunity to tour with Amanda Palmer. Towards the end of their set they asked us to stand to attention so that they could take a picture of us all, they would put the pics on Facebook and we could tag ourselves in them.  What better incentive to become a fan of their page!  I’ve tagged myself in the pics but they are so dark I’m not sure it’s actually me!  Their hard work is paying off too, I notice that this ‘small band’ now have over 1,000 fans and growing rapidly.

The Amanda Palmer part of the gig required far more technology.  Due to the volcano the original show which featured at least two other artists wasn’t able to go ahead as planned.  Using Twitter and Facebook Amanda managed to assemble all the tools she required for the gig. A computer, a webcam, a kazoo and a Twix bar.  When someone is described as ‘phoning a performance in’ it usually refers to a poor or lacklustre performance, but at this gig it meant literally phoning it in as Amanda’s co performer Jason Webly  appeared via Skype to the audience.  The whole show was then broadcast live across the Internet to around 3,000 viewers.

Social media has always been a fantastic way to promote artists and music and it’s great to see that bands of all sizes are using it creatively to market themselves.