It’s almost two months since Facebook announced it’s competition guideline changes. I announced it as good news and I still believe it is. If you want to boost interaction on your page and get more people talking to and about you Facebook Timeline competitions are an excellent tool.

However there does still seem to be some confusion about what is and isn’t allowed. I wrote about the changes when they were first announced but I thought it was time to clarify the rules and include some examples to inspire your own Facebook Timeline competitions.

Here’s a link to Facebook pages terms, scroll down to section E and you will find the rules pertaining to comeptitions.

What Do They Mean? 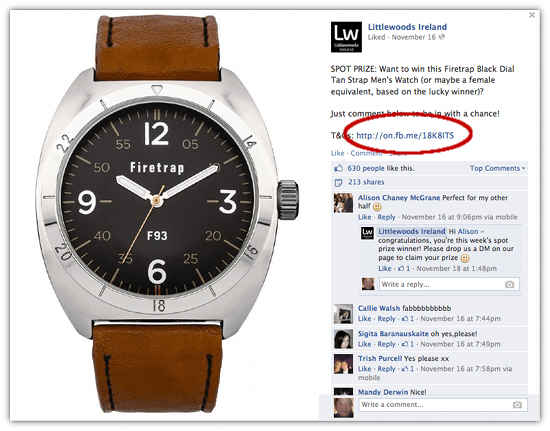 Sadly we are now seeing even more Like & Share competitions as a result of the new rules. It looks like people either haven’t read the rules or have misinterpreted them. See this example from a company big enough to know better: 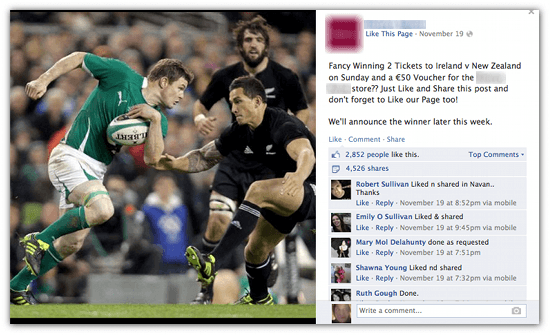 I do like the way Her.ie have gotten around this rule. They don’t ask for a share but remind you that sharing is caring. It’s a bit cheeky but it’s compliant. 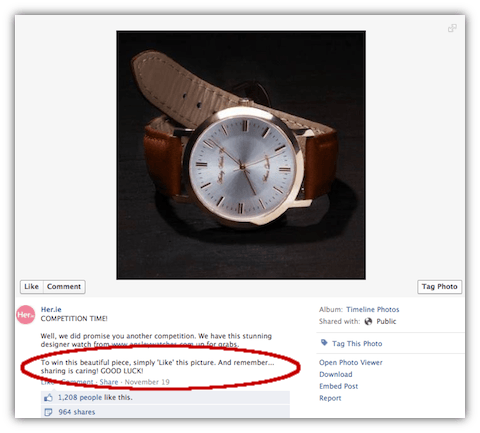 As page owners are aware the reach of posts has been getting lower and lower. We have to work really hard to get our content seen. Part of this is due to the popularity of Facebook, there is so much content being shared they are unable to show every user every post we make. They have also been messing with their algorithm. According to Facebook they peanalise content that includes a request for a Like, less people will see posts of this kind from now on. So if you are going to run a competition you are better to ask for a comment.

Here’s a really clever competition that uses commenting. It was pointed out to me by Digi Women last week. Again it’s a bit cheeky and I know we’d all get annoyed if everyone started doing it but you have to admit it was a clever idea.  The last person to comment wins the prize but they don’t tell you when they are closing the competition… and they got thousands of entries. 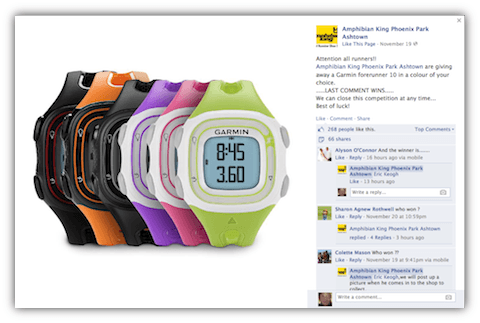 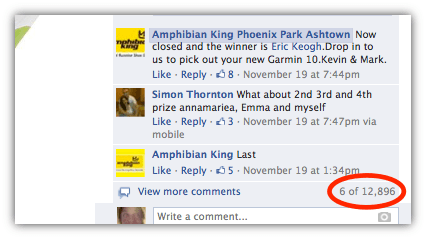 The Benefit of Interaction

What is the benefit of running these competitions if you only get comments or post likes? To find the answer we need to go back to the Facebook algorithm. The foundation of the algorithm was something we used to call ‘Edgerank’ although the term has died off  the basics still persist.

If someone comments, likes on one of your posts, or even if they click on a link or image within your post Facebook knows they are interested in your stuff. In the future they will show you more content from these pages. As Timeline contests encourage engagement it should mean that your future posts will also be seen by more people as a result of their interactions on the competition post.

Why Run Compeitions Via Applications?

When Facebook announced the changes to competition rules many people thought it would spell the end for competition applications but there are still many compelling reasons to run a competition via an app. Take a look at this infographic to find out more.

Of course I am a massive fan of ShortStack (affiliate). You can download my step by step guide to getting started with ShortStack here.

Are you running a competition on Facebook or do you just get annoyed by people running rule breaking contests? How could Facebook make the rules more obvious? Leave me a comment.