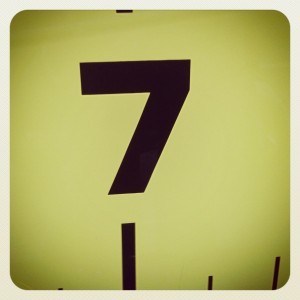 The Facebook acquisition of Instagram still seems to be dominating the social media headlines this week, mini blogging platform Tumblr have launched advertising on their dashboards but neither of these make it into my social 7.  Instead we look at a great Pinterest case study, the story of a Facebook page that was taken down for running rule breaking competitions and some great Linkedin tips. 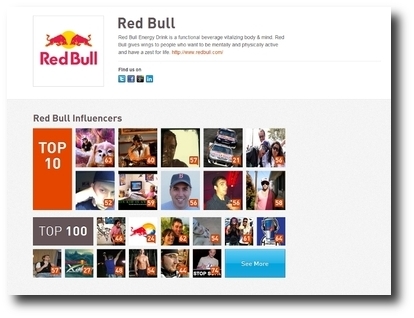 If you’ve been reading my blog for a while you will know I’m a bit cynical about Klout, in some respects it does look like a great way to identify influencers but there have been some huge privacy concerns and it also seems that it often marks someone as influential about a topic that the user has no interest in.  However I do sometimes get persuaded to look again.  There are some great examples of Klout encouraging advocates in Brian Solis’s ‘The End Of Business As Usual’ that I found quite compelling.  This week Klout announced brand pages that will display the most influential people associated with a brand and offer perks to influencers.  If you are on Klout you probably received an email about it showcasing the Red Bull page. I can see this being a great tool for large companies to reward their most ardent fans, I also see it as a great research tool for smaller businesses that share a target market with some of those using the ‘Brand Squads’. Read more about the new pages on Silicon Republic. 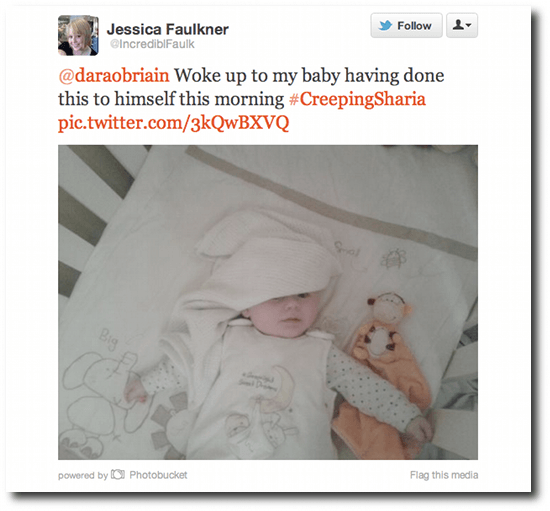 Idiotic UK far right group the EDL learnt a thing or two about Twitter this week. Their leader tweeted in disgust at a Mosque being included on the Twitter home page (it was in fact the Taj Mahal) and appended his tweet with the hash tag #creepingsharia. Thankfully Twitter reacted by doing what it does best, it hijacked the tag making a mockery of the original post. Below is one of my favourite tweets.  The tag is still going strong too.  The story even made it into The New York Times.

Facebook competitions – how one man had his page deleted twice

I posted this on Facebook today and it got a huge reaction.  I always advise clients to abide by the Facebook promotional guidelines when running a competition but it can be hard when we see so many others breaking the rules.  Very often people think that it’s OK because everyone else is doing it.  This post shows one example of why  breaking the rules can result in you loosing your page and all the people connected to it.

As I mentioned above Instagram is still the big news this week due to the Facebook buyout.  Lots of new people have become aware of the photo sharing social network for the first time and downloading it. But onece you’ve got it what do you do next?  This article is a brilliant quick start guide for new users. It takes everything that I had to work out over time and puts it in simple terms, in short I wish I had read this before I started! If you’ve just got Instagram read it and have fun. 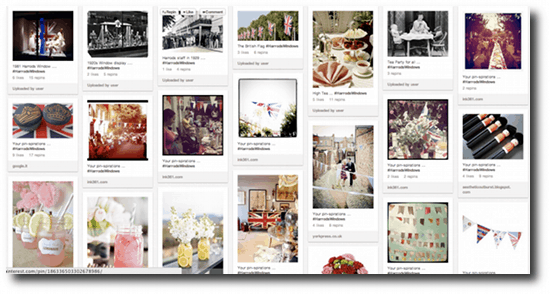 Pinterest persists in being one of the most topics talked about in social media and this is by far the most clever marketing campaign I’ve seen yet from a brand.  Harrods are giving users the opportunity to inspire the design of the Knightsbridge stores Jubilee window.  Pinners just need to create a mood board and submit it to be in with the chance to win a trip to London to see the window unveiled.  Not a fantastic prize, I’m guessing there will be more to it that just a visit to the store !  For more on this competition and details on how to enter click here.

Staying on the topic of Pinterest this application looks pretty cool, it was submitted to appear in my weekly roundup by one of the Spiderworking.com Facebook community.  It allows you to create boards from one single photo.  Great examples but it’s definitely weighted too much in favour of dogs at the moment. I’m off to create a cat one!

I often feel LinkedIn gets overlooked by many.  It doesn’t have the pizazz of Facebook, the cool of Twitter or the incentives of Google+.  It is however a hugely powerful tool, I know I get probably more concrete leads from it than any other social network.  It’s also a fantastic research tool that can help you reach exactly who you need to in an organisation.  If you’re still struggling on getting started this article is full of tips to help you build a valuable following.

OK so I might not be using the network that much yet but I do seem a little obsessed don’t I?  This week’s Monday cool tool was a neat little app that allows you to change data into pinnable images. Pinstamatic uses notes, quotes, location info, screen grabs to create the pins. More here.

Getting influencers on board with your brand is key to any social media strategy, some will come by themselves if you create the right content to attract and engage them, others you may need to be more clever to attract.  These four case studies show brands that are reaching out further to find people who will talk about them online.

I’m lucky enough to be organising the Blog Awards Ireland this year with Beatrice Whelan from Sage Ireland and Lorna Sixsmith from Write On Track.  Lorna and myself went to Dublin at the weekend to meet Greg Fry from TweakYourBiz TV.  Here’s what happened.