Have you ever stopped in the street when you’ve seen something odd and taken a photograph?  Been caught in a flashmob and tweeted a quick photo or video from your phone?  Have you scanned a QR code in a strange location?  I know I’ve done all three and that’s probably why I find the idea of  ‘shareable objects’so interesting, they capture your attention and encourage smart phone users to share via their social networks.  They’re a great way to grab some attention and spread your message beyond your existing community.  If you were on Grafton Street in Dublin on Wednesday you may have seen shareable objects in action as Sage Ireland launched Sage shaped  fluffy clouds (flogos)  into the sky as part of the launch of their new cloud service.  This week I talked to Beatrice Whelan Social Media & Content Specialist at Sage Ireland about what inspired the campaign and how well it worked.

You used Flogos to promote the Sage Cloud campaign, what are they?

Flogos are flying logos for sky advertising. They can be made into many different shapes. They  have the look of a soft, puffy cloud.

For our event we choose the Sage logo, a cloud shape to convey the message of Sage Cloud software and a lightbulb shape to sybmolise a new idea. The Flogo clouds can hover at various heights, and as they contain helium this can be controlled so we could keep some low for capturing photos and let others go high to spread our message.

Were flogo’s your idea for the campaign and where on earth did you hear about them?

No, not mine. One of the agencies we work with, Boys and Girls, presented the idea to us and we loved it. I have never seen a medium fit the message so well before. It literally puts Sage in the clouds. I immediately started to think about the social media aspect of using them and how they could be shared and used from a social media point of view. As Flogos are shareable objects they are perfect for social media use.

Flogos have never been used in Ireland before. They are not that ‘new’ in the sense that they have been around for a few years but no one here has used them before. When Boys and Girls presented the idea to us, we did some research online and we got excited about the possibilities.

What made you choose them over other marketing devices?

They were just so well suited to our message that Sage is in the Cloud, Sage have a portfolio of Cloud software and the Flogos look like clouds when they are floating in the sky so it was a perfect fit. The fact that we could also make the Sage logo into a flogo was also very exciting. Ultimately that was what made us choose them. We also wanted to do something innovative and different that had never been done in Ireland before. We wanted to do something that would work just as well outside of social media so even if you are not on Facebook or Twitter, you would hear about our cloud launch via traditional media or you could come across the video when you do a search on Google, or you might just come across them on the day as many people did. 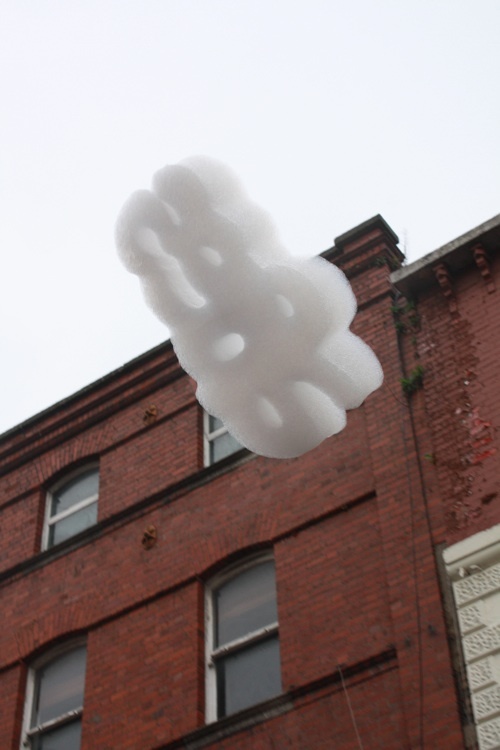 How much work went into the planning of the event?

The event took a lot of planning but we had a lot of help. Our PR Agency, Elevate were a great help and organised a lot of the practicalities. The Flogo machine was brought over from the UK. We had to get permission from Dublin City Council and the Aviation Authority. We had an event schedule and a social media schedule so everyone involved knew what was happening on the day.

Did you have any specific goals in mind at the planning stage?

Our goal was to get the message of the Sage Cloud out to as many businesses as possible. This included getting media interest and also generating interest via social media, before, during and after the event. 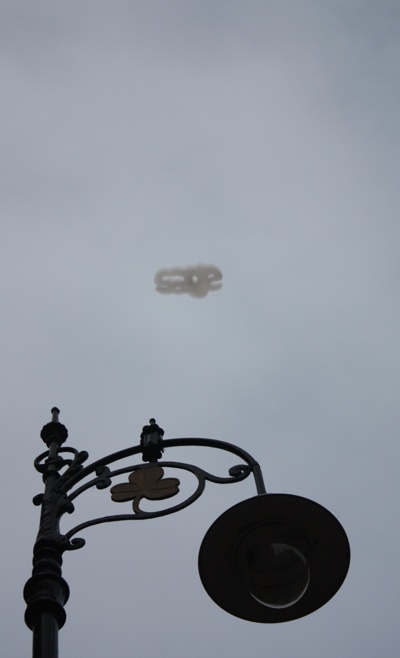 Did anything you didn’t expect happen?

Yes, we were happy to see that people took their own video of the Sage Flogos and posted them to YouTube. [I love that this one is labelled as UFO’s – Amanda]

This was a nice surprise, it is something that you hope might happen but can’t really expect it as you can’t plan people’s reactions. We were also surprised that people actually followed the Flogos from where they could see them down to where we were to ask us about them. One business man followed them down from Georges Street. We knew that people that were passing by would find them interesting but we didn’t expect people from streets away to follow them back to us. I was also surprised by the number of people that came up to us on the day to ask us about them, people seemed really curious and intrigued.

You used a Twitter hash tag on the day.  What was your reason for doing this and did it work?

I wanted to help spread the message about what we were doing on the day via Twitter. We hoped that people would Tweet about them and start a conversation, even Tweeting where they had seen the Flogos and posting their own pics. A #tag allowed us to track this conversation and see what people were saying even if they did not mention @Sageireland in the tweet, once they used the hashtag we could still see the activity. The particular tag we used #followthecloud was also mentioned in the video that we produced as the words Follow The Cloud come up at the end of the video and so fitted nicely into our overall message. It also allows us to tag any future message we put out on Twitter about our cloud offering or cloud news in general without having a need for a separate Twitter account about Sage Cloud.

What do you have planned next?

Lots. Within our Sage Cloud campaign we have a competition coming up on our Facebook page in the next few days that will allow people to enter to win free cloud software for a year, a notebook and a wireless printer, so they can enjoy the benefits of working in the cloud. On Thursday 16th Feb we are hosting our first Facebook expert chats called ‘Lunch ‘n Learn. This one will be about Cloud so people can come onto our Facebook page from 12.30 to 2.30 on the 16th Feb and ask any question they have about using Cloud software for business. You can register and submit a question beforehand on our Facebook page. Our second Lunch ‘n Learn on the 15th March will be about Social Media for Small Businesses.

We also have lots of activity planned on our Blog, YouTube Channel, Linkedin and Google+ page so watch this space!

Although Sage is a big company with a budget there is nothing stopping small businesses using shareable objects.  Have you seen any good examples?  Have you tried anything like this yourself?  I’d love to hear your experiences in the comments below.

If you’re interested in running a creative social media campaign using shareable objects get in touch to book a free consultation.