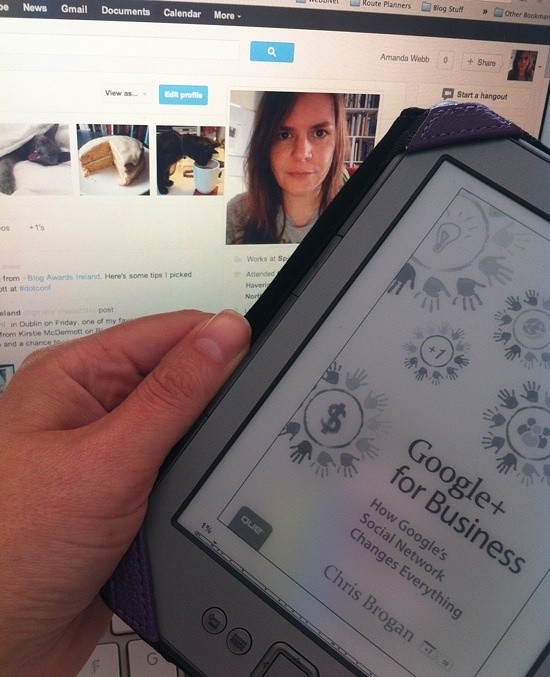 That title may seem a tad bold but it’s true.  Google+ For Business is a fantastic book on social media with examples drawn from Google+.  Sometimes we get too carried away with the tools and forget that social networks essentially all work the same way.  Some networks are better suited for particular audiences or target markets but how we approach them should be pretty much the same.

Having said all that since I’ve read this book I’ve been thinking of new ways of using G+, I’ve been more active, more creative and I’m beginning to love the place.  Chris wrote this book back in the early days of the network so he doesn’t delve too far into business pages.  From a personal and social point of view it’s much easier to use profiles than pages but that doesn’t exclude you from doing business there.  You can meet people as easily as you do on Twitter and you can build relationships with prospective clients the same way you might over time at networking meetings. So like most social networks Google+ works because it’s about building relationships, sharing useful and relevent information, letting your personality in and being real.

Back to the book.  It’s an easy read, it’s the first business book I’ve read on my Kindle and this was the perfect format for it.  I could pick it up whilst on a tram or during lunch.  It’s packed with case studies and what becomes clear is that people are approaching this relatively new network with fresh eyes.  They are finding new ways to do things, new content to share. I love the story of Jaqueline Carly, a fitness instructor who posts photos of herself pre and post workout everyday.  It’s this sort of simple but effective marketing that keeps Google+ interesting.  He also interviews some of those social media superheros including Scott Monty from Ford and Darren Rowse from ProBlogger.  He looks at how Michael Dell (from Dell) uses the network, he looks at the different ways people are approaching it and creates some scenarios of his own that small businesses would be wise to look at.

Then there is the bit that is really about Google+, although he doesn’t delve too deeply into the technical stuff he does share tips on how to make your profile more effective and how to manage circles.  Although Google+ has seen a redesign since this was written the tips are just as relevant, it’s a great beginners guide but also useful as a refresher if you’ve been there for a while.

Should you give Google+ a try?  Of course! Should you read this book?  Absolutely!

Buy the paperback on Amazon here. Or the Kindle version here.