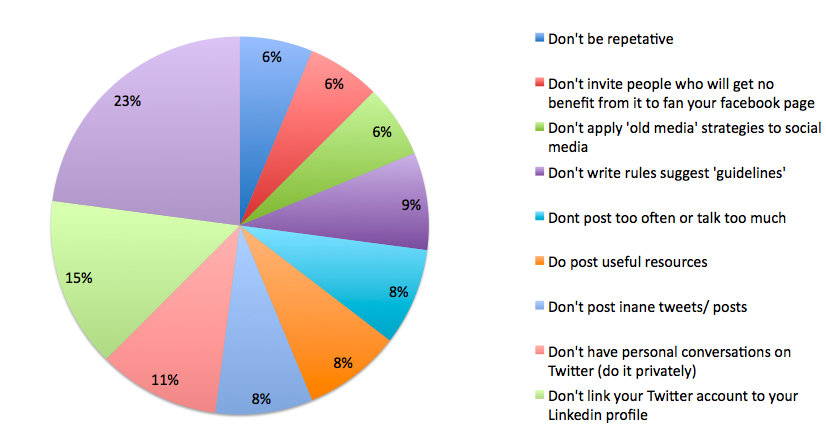 This has been a really interesting discussion. We started in July with the second round in August.  Finally we have a comprehensive list of the dos and don’ts according to all of our social media communities.  A big thank you to all of you who took the time to contribute.

A big surprise for me was how strongly people felt about some issues.  And I have to bow to popular demand and point out that the list below is simply a list of guidelines.  There are exceptions to every rule and some people find even the highest rated don’ts work for them.  However I would exercise caution, whatever your strategy it is important to measure the results clearly and consistently.  Is social media really working for you and if not how can you adjust your behavior for better results?

I have also resisted adding my opinion to the survey so far as I wanted to see what others thought but now that the results are in I’d like to add my vote to ‘Do be polite, considerate and respectful’.  I see this frequently abandoned in the heat of the moment and I think it is important to remember that everything we say on the Internet reflects on our business.  Being controversial works but there is a fine line between controversy and rudeness, a line that I strive not to overstep.  Having said this, again there are exceptions to the rule, controversy and rudeness, if it suits your business could be a big draw.

The Full List as suggested by our online communities: