When I was compiling my list of digital predictions for 2013 I’d never heard the term Real Time Marketing (RTM) but now it’s one that seems to be mentioned daily in online marketing circles. Although the term has, according to Wikipedia, been knocking around since 1990 it’s really coming of age in with social media.

The first time I heard the term was during coverage of the Superbowl.  During a power cut that interrupted the event Oreo came up with this now famous piece of content.  Since then it seems like brands are desperately trying to jump on the RTM bandwagon, some more successfully than others. 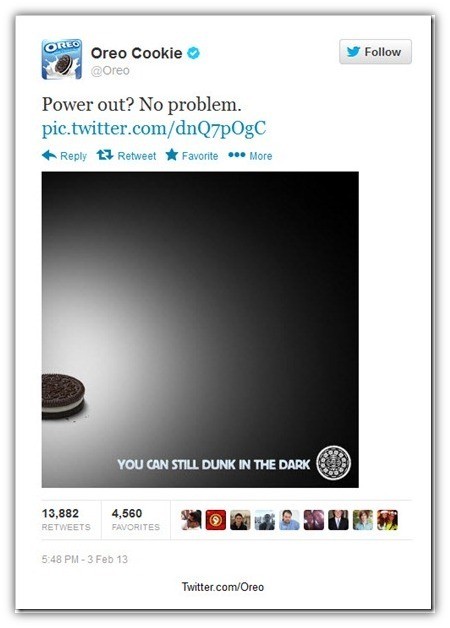 You’d have to have been offline this week to have missed the news that former British Prime Minister Margaret Thatcher died.  The reaction online both in Britain and Ireland is mixed. Many are celebrating the passing of a woman who they hold responsible for the issues that are currently tearing their country apart. Others are paying tribute to her as a strong no-nonsense leader.  It would be fair to say that most of the comment in my own feeds has been the former.  It seems that the Manager of Oddbins Crouch End had a similar opinion, sending this tweet from the official business account.

To me the tweet seems quite restrained. They haven’t #tagged it and it doesn’t make direct reference to the death, just suggests it.  It seems however that Thatcher loyalists and those who believe the celebrations were untasteful took exception.  The tweet was swiftly removed. The fact that the story reached my Twitter timeline shows that the story has been spreading far and wide.  Although there was lots of negative responses those who are pleased at Thatcher’s death may be more inclined to buy from Oddbins in the future. If only they had done the research first.

I doubt the manager of Oddbins, who has since been suspended, was familiar with the idea of RTM but it is clear that the tweet was designed to bring in business from a current event. Examples like this are why it’s so important to have a set of social media guidelines from head office so that you know how you should react in particular situations, what is acceptable and what isn’t and to set the correct tone of voice to represent your brand.  Even small businesses or one person businesses need to put a policy in place, this way we have something to refer to in the heat of the moment. It’s easy to react with emotion, in this case the obvious delight of the manager, a policy brings logic back into play.

What do you think of the Oddbins tweet? Were the company over the top in suspending the manager?